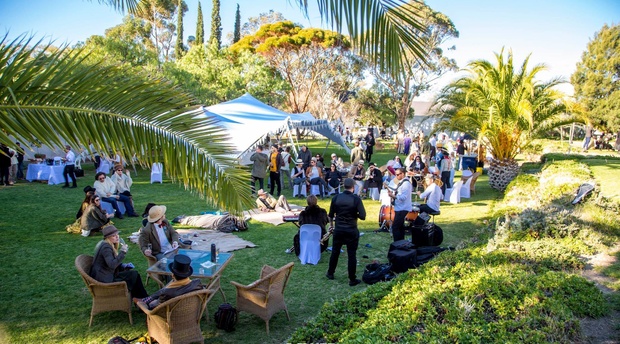 What happens when people dressed in Victorian finery take over a town? When fine wine flows right along with fine conversation; when parasols are twirled on the dancefloor; when tea and cupcakes are enjoyed under the wide blue Karoo sky?

What happens—just like it’s been doing for over 100 years—is Matjiesfontein is hosting a party.

Wolfkop Weekender is a music festival that is first a weekend. The idea is to enjoy a beautiful and unique environment—with some music in-between. The festival-guests took over our town on the weekend of 3 to 5 June.

Under the umbrella (or is that parasol?) of the name ‘Cooked Sister’, the weekend away saw pop-up parties taking place in the courthouse, The Pink Church and the transport museum with some of South Africa’s finest DJs and musicians.

People enjoyed Bloody Marys around the pool, jazz and games in the garden as well as high tea under a beautiful white tent.

There’s a long tradition of social gatherings at Matjiesfontein. Our original Laird, James Douglas Logan was known as a social entrepreneur. Logan was the man responsible for bringing all the influential people of the time to our small Klein Karoo outpost, such as Rudyard Kipling, Olive Schreiner, Lord Randolph Churchill (father of Winston), Cecil John Rhodes, among many others.

The tradition continued with the next Laird, David Rawdon, who also hosted many influential people of the time too: "Matjiesfontein was David's chosen place where his fun, his generous spirit, his magic and infectious naughtiness filled the streets, where champagne was served on the stoep at the drop of a hat, where jokes and stories were recounted tirelessly, where we went for picnics in the veld in the old London double-decker bus."

Wolfkop Weekender was a continuation of this fine history of social gatherings. Nothing was recreated, history was instead alive again.

True to its legacy—this weekend showed Matjiesfontein as the social destination it is.

Our team is still smiling.